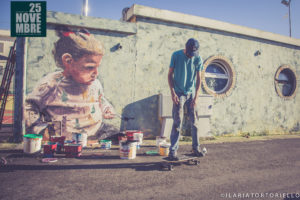 We left behind the fifth edition of the side project by Davide Rossillo, creator of Memorie Urbane, consecrated to the International Day for the Elimination of Violence against Women.

Guest of the festival for 2016 was Apolo Torres – Brazilian artist already known to the audience for the interventions in Formia, Gaeta and Arce in 2015 – who made three walls in Fondi, Terracina and Scauri, in addition to a numbered and signed in 30 copies screen print, Nature x Nurture, in collaboration with the gallery Street Art Place.

The role of women in society has been declined in a contemporary and realistic key, with an attention to detail typical of the artist from São Paulo. Several topics were covered, the vicious and suffocating circle of daily life and the thirst for knowledge, up to the various passages of life. A very delicate issue, which took three different approaches to a single cause.

The first work, in Fondi, concerns domestic violence: «The idea came from a poem I heard the night before – Torres tells us – and it was my way to convey that stifling, suffocating feeling inside your own house, in daily life».

The second one, in Terracina, represents a sort of continuation of a big wall I did in São Paulo for Education Is Not A Crime campaign. The organization fights for freedom in education, especially in Islamic countries, where women, even if they’re muslim, and those who do not follow the State religion are deprived of the right to schooling.

The last work, in Scauri, deals with fighting objectification: « I depicted 4 women in different stages in their life, representing a daughter, sister, mother and grandma, as a way to remind that all woman are a part of a family. They have people – says the artist – that care about them, depend on them, and also that every man has a mother, grandma, maybe a sister or a daughter. It’s an attempt to create proximity, like “treat your woman the way you’d like your mother, daughter or sister to be treated”».

«The first time I came here- closes Apolo – there was also the expectation about going to a place I had never been before: I wasn’t sure I would have been able to communicate well, while this time I knew where I was going and I was very excited. Scauri was something unique. I’ve painted in big crowds before, but it was music festivals and I wasn’t the main attraction. It didn’t hinder my work, on the contrary I really enjoyed the warmth of those who talked with me, thanking me for what I was doing, complimenting me. It actually gave me a much wider comprehension of the importance of public art».

Of the three walls made by Apolo Torres for 25novembre.org we printed, as usual, the respective postcards. The one in Scauri appears also at November in the 2017 Memorie Urbane calendar, that you can buy here.